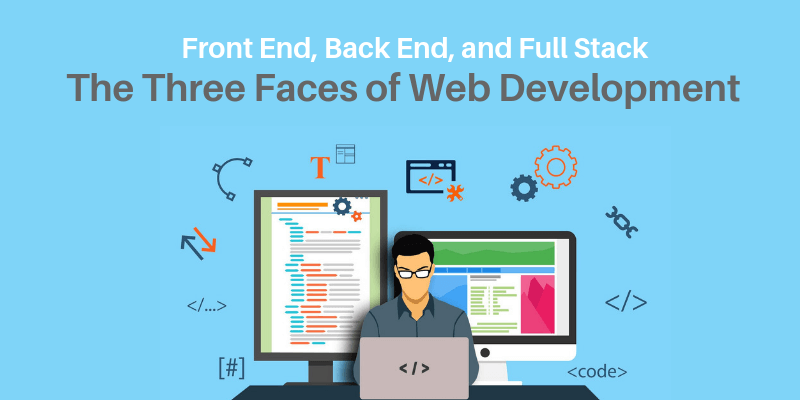 Rollback a few years and you would find that web applications were little more than digital catalogs. For the most part, they were static and as they had fewer footfalls, the risk and repercussions for crashing websites also used to be low. Those days it used to common for a single person to design, develop, and even host their website! But as the scale and complexity grew, web development has gradually moved from a generalist to specialist approach- giving rise to separate domains of frontend, backend full stack development

But that isn?t the complete picture. If you have ever scrolled through job portals, you would rarely find job profiles named Backend Developer or Frontend developer. Instead, the developers are generally associated with the technology they work on rather than on which end is it applied. Further, the rise of languages like JavaScript has further complicated the matter by blurring the line between the two, something we would discuss later. To get a clear picture, let?s first probe each of them and then we will try and come up with a generalized conclusion.

As the name suggests, this part of development creates the face of web application- the part that users actively interact with. Every webpage is built using a markup language called HTML (currently HTML5) while CSS and JavaScript are used for design and integrating dynamic components. But as mentioned before, you would rarely find a job profile named frontend developer because they are generally called UI/UX designers.

As much of the application is built using ready-to-use components and templates, the task of these developers slants more on designing than development. Not just the aesthetics- which is a part of the interface but also the entire workflow- that constitutes user experience.

Overall, all you need is a UI/UX developer and a PHP/Python/NodeJS developer to build any web application.

Generally, developers who carry expertise on all parts of application development are referred to as full stack developers. In theory, that is quite simple to explain but as mentioned, web development technologies have evolved a lot over the years and things aren?t any more so easy to segregate.

With the advent of many tools and technologies, JavaScript, in particular, have a line between frontend and backend development has blurred. As mentioned, JavaScript remains a key component of frontend development but if you noticed, NodeJS- a backend platform, is also based on JavaScript. Similarly, there are many low-code tools that offer components with both GUI and backend functionality. So if a developer builds web applications with these new tools, are the front-end developers or the backend developers?

Overall as a general rule of thumb, we should be segregating these domains only for custom web application development and not all web development projects. In that case, our neatly defined categories hold true. Otherwise, it is more plausible to assume that full-stack developers have built the application.