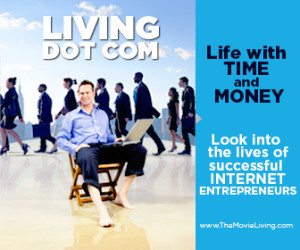 Over the past several years we've seen the American economy shifting in a variety of ways that many people are having a hard time coming to grips with; jobs are harder to fine than ever before they?re just not there anymore, even for those with a big fancy education and automation is replacing human workers all over the place.

It?s a challenging time for a lot of people, and sometimes I feel a bit as though there?s a feeling of hopelessness when people talk about the economy and the terrible ways this change is affecting their lives; this movie addresses that issue perfectly by presenting people with an alternative to the way we were brought up to think about jobs, the economy and working hard to create a financially independent life for ourselves and our families.

The Living Dot Com brings the new economy out in the open for people and examines it carefully; while we all know that we need a new approach, many of us aren't quite sure what that approach should be and this movie provides clarity around that issue by providing solid examples of how to succeed in the new economy.

Yekra is a revolutionary new distribution network for feature films.

“””Living Dot Com shows how a different approach to work must be taken in this new economy in order to succeed. Jobs may be disappearing but, for many reason discussed in this movie, there has never been an easier or better time to start a business. Creativity is king as many tasks that were expensive (and good jobs) in the past are now low cost due to automation and outsourcing.

This documentary gives an intimate look into the lives of successful Internet entrepreneurs. You will discover how it is now possible to earn over a million dollars a year online, work from the beach during winters, close deals while at a BBQ, or run a business from an IPhone. This new wave of enterprisers truly leverage technology to live a 21st century lifestyle or, as they call it, the “”””Dot Com Lifestyle.”””””””

One of the biggest agents of change over the past decade or so has been technology; tasks that used to pay extremely well are now either outsourced or automated and as a result people are finding that jobs are scarce, but one of the most vital things that people need to realize is that the job market will never go back to the way it was, this is a permanent change and in order to succeed in the new economy, we need to adapt to the new way.

As such, the movie gives us an inspirational view into the lives of those who have embraced and thrived on change; we've all heard about successful Internet entrepreneurs, the ?lucky? ones who earn more than a million dollars a year working from home over the Internet but this movie brings that reality into focus by providing us with an intimate portrait of several of the most passionate and successful Internet entrepreneurs in America today.

You?ll learn how these people have leveraged the power of technology to create an amazing and abundant lifestyle for themselves by using their entrepreneurial spirit, their creativity and their drive to succeed, and you?ll get a first-hand look at how they do it.

But the most important thing you?ll learn is that these people are just like you; this movie combines inspiration with practical advice and information to show you all the ways technology is creating a new global economy that you can be successful in, and to empower you with the knowledge of how to apply your time and talents for huge returns in personal wealth and freedom.

We've all been through a time of massive change and as with any change it?s been unsettling to say the least, people are uncertain in many cases and some have suffered; this movie puts the rise of technology into an entirely new perspective to teach you practical ways that you can fit into the new Internet economy and use technology to adopt a new lifestyle and succeed in ways you've only dreamed of.

I?m passionate about this film and I promise you, it?s one of the most important documentaries of our time; this movie will change the way you view the world around you, and set you on your path to success.