Day 2 started off early I headed to the exhibit hall. I stopped by BlueGlobalMedia booth and shot a quick Q&A with Chris Kay using my Flip Mino. Chris talked about BlueGlobalMedia and how they recently upped the referral program to 7% . He also talked about how they have?exclusive?offers and publishers do really well with?their?in house offers such as?financial?services, “100 Day Loans” is one of the?biggest?financial?offers out there so be sure to sign up with BlueGlobalMedia.

I ran into some of the wicked fire guys Ad Hustler,Pappa John to name a few. Then I decided to go to leverage your brand for affiliate success session with Jim Kukral. Then headed to the blogger lounge to meet up with Syed Balkhi and John Chow. The three of us decided to go to the SEO ? Ask the Pros session?with Todd Friesen, Greg Bower, Stephan Spencer. They gave some great tips! 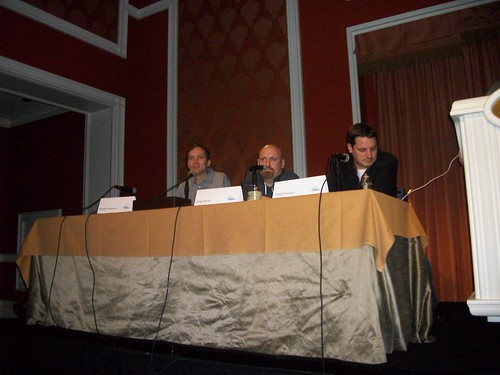 After the Ask The Pros about SEO session I decided to make my last run of the day through the exhibit hall with John Chow & Syed Balkhi. We stopped by the ShareASale booth and John got a record breaking 750 points playing the ski ball game ShareASale had there.

Why Didn't I Think Of That?

Inevitably, at some point in your life you've had a head-slapping, stop in your tracks moment where you say to yourself, “Why didn't I think of that???”. Every year thousands of creative entrepreneurs come up with a new product, or service, or website idea that makes it big, earning the creator either a giant paycheck or boatload of publicity, or both.

So why isn't that person you? It can be.

Now is the time to act! Still not ready? Maybe you just need to hear about some people who have done it in order to get your juices flowing. Here's a run down of some of those people who took their ideas (crazy as they may seem) and turned them into gold.

Jason Sadler is another one of those Web-entrepreneurs that have taken a silly or creative idea and turned it into Web gold! Jason created IwearYourShirt.com, a site that features him wearing a new shirt every day, each one sponsored by a new advertiser. In 2009 Jason successfully sold 365-days of sponsored shirt wearing, earning him just under $70,000.Yes, you read that right. Jason made almost $70,000 for wearing a different t-shirt every day. Doesn't sound so silly now, does it? Kyle MacDonald bartered his way from a single red paperclip to a house in a series of online trades over the course of a year. That's right, he used the power of the Internet and a creative idea to trade something of almost zero value, for something (a house) of actual real value. Alex Tew is the guy who came up with The Million Dollar Home Page.

A student at the time, Tew needed to find a way to pay for his education, so he took a chance and created a web page that sold 1,000,000 pixels for $1 each. Hence, ‘The Million Dollar Homepage”. In fact, Tew did sell all 1 million pixels and earned himself a nice paycheck, and tons of publicity in the process. These projects illustrate that even the simplest or craziest or weirdest or unusual idea can be turned into reality, and Web gold. It should also be pointed out that for every one of these types of projects that succeed, ninety-nine other similar projects never get off the ground. Personally, I've taken two stabs at viral glory with two sites that never did catch on.

If you want to see them in action visit AwesomeMillion.com and BigBrownBox.com. But just because success doesn't come doesn't mean you shouldn't stop trying. As all-time great Wayne Gretzky so famously quoted once, “You miss 100% of the shots you don't take”. It's time to take your shot. What's the worst that could happen? It becomes a hit and all your dreams come true? For inspiration, here's a quick list of some risk-takers you probably know about that turned an idea into reality and into a huge success.

Red Bull energy drink ? The idea was to create a super-caffeinated carbonated beverage and market it to athletes and the party crowd. Through some creative and unusual advertising, Red Bull now has $3.4 billion in sales.

Amazon.com ? Who wants to have to go to a bookstore to buy a book? Jeff Bezos created Amazon because he realized that driving to the bookstore was an enourmous hassle and there could be a better way.

For over 15-years, Jim Kukral has helped small businesses and large companies like Fedex, Sherwin Williams, Ernst & Young and Progressive Auto Insurance understand how find success on the Web. Jim is the author of the book, “Attention! This Book Will Make You Money”, as well as a professional speaker, blogger and Web business consultant. Find out more by visiting www.JimKukral.com. You can also follow Jim on Twitter @JimKukral.