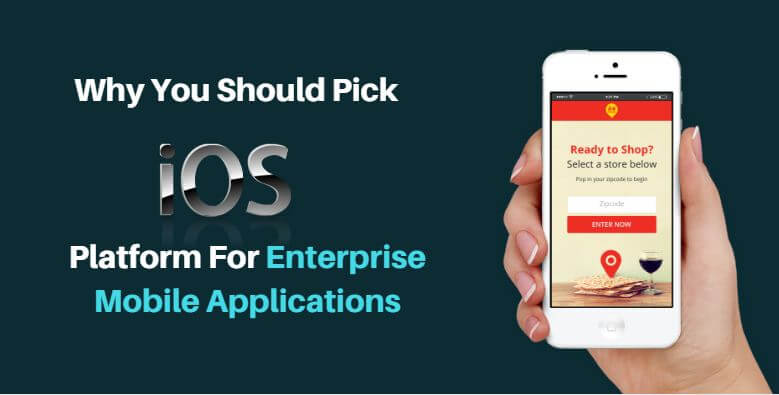 Why You Should Pick iOS Platform For Enterprise Mobile Applications

If you don?t already know, computers were first built for military and scientific purposes, which businesses later adopted and it finally trickled down to the consumer market. With smartphones, the flow is just the opposite. They were built for the consumer market but now are widely used by businesses to bring operational efficiency and transparency.? And just like computers, mobile platforms too have over time evolved to become a duopoly. That is, if a business wants to build an enterprise application, they have only two feasible options- Android or iOS.

While we won?t be delving into a detailed debate between the two platforms, the crux of the matter remains- Android yields lion?s share of app userbase but iOS has more secure and consistent market. That is, Android remains the preferred choice for businesses who need to reach a large number of users while iOS is tuned for businesses who need to deliver a superior and secure user experience. Upon that matrix, the enterprise applications clearly fall into the second category.? So let?s now take a detailed look at the benefits businesses can have by building an iOS app for their enterprise:

One of the key selling points of iOS devices is its simplicity- the ease of use for even the most technically naive person. And because businesses can?t expect all of their employees to be technically proficient, it is their responsibility to keep enterprise application as simple to use as possible. Not only does it ensure wider acceptability but also brings down the initial barrier of training. Especially if some application is going to be used across all verticals,

Although it is used by less number of people as compared to Android, iOS platform claims higher usage in a very niche category of users- those financially well-off and reasonably educated, precisely the class employed by enterprises. That is, enterprises generally have an employee base that is already accustomed to the platform and so instead of introducing a new platform will be far less productive than building on what they are already comfortable with.

Apple is renowned for its tight security leash on both hardware and software levels- making the entire ecosystem much less vulnerable to security leaks and hacks. For businesses that rely on enterprise applications not just for operational efficiency but also handing confidential data, this can be a major priority. While developers are still free to add extra layers of security, the inherent iOS security is alone enough to ward off most of the vulnerabilities.

At its recent WWDC 2018 event, Apple demonstrated how valuable it can be to have tight integration between hardware and software. Not only most of its devices run the same version of iOS, but it even rolled out the latest update- iOS 12 to its five years old devices. For enterprise mobile application development environment, this is a major blessing. Unlike consumers, businesses do not frequently change hardware and are notorious for running legacy systems. But with such consistent and long-term update cycle, they can rest assured.

Unlike consumer applications that generally work stand-alone, enterprise applications work in coordination with a host of other apps including cloud apps, system apps, and more. With iOS, you have the option to leverage the entire Apple?s ecosystem- which probably is the best available. Having almost all the solutions, it ensures all your business runs on a secure, stable, and feature-rich platform.