Migrating to Magento 2? Here are the Risks You Must be Aware of 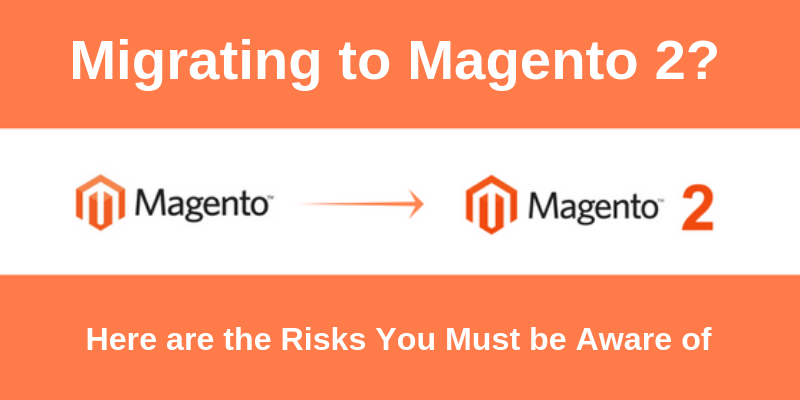 Magento 2 is now almost three years old and despite the company pushing hard for businesses to migrate from Magento 1.x, there has been abysmal momentum till now. We?ll get into some of the reasons why businesses are so reluctant to move on to the next technology but it is worth noting at this point that as Magento 1.x reaches its end-of-life in 2019, they seem to have little choice but migrate. And while Magento has stepped in to alleviate any panic by announcing at least 18 months of additional support, the passive message it is sending is that it?s time businesses seriously start working on a migration plan.

After all, depending on the size of your business, the actual migration itself may take around 3-4 months and if you throw in the extra few weeks for prioritizing tasks, negotiating with Magento developers, and post-migration troubleshooting, the entire process would easily skew over six months.

Read Related: You Need to Know All About Magento 2

So what if you refuse to migrate?

Well, technically there is no compulsion for you migrate to Magento 2.x. It?s not like that other software that simply stops working unless you update them. But it has its implications. First of all, you would stop receiving security updates, thus making your platform not just vulnerable but the prime target for cyber-attacks. From active attacks on servers and websites to passive snooping, you will be essentially on your own. Then there will also be the gradual degradation in performance, spiraling into a mediocre if not bad user experience. At such point, the store essentially losses all its leverage of using a sophisticated platform like Magento. This should make it clear for any business that migrating to Magento 2.x is now a matter of when not if.

Why are businesses reluctant?

Upgrading an eCommerce store from Magento 1.x to Magento 2.x isn?t like updating your smartphone. It?s more like rebuilding your store with a new set of tools that comes with a whole lot of challenges:

The first concern that most businesses have when they consider migration is the disruption that it would ensue into. Many of them have a perfectly fine store but migration would mean:

Migrating from Magento 1.x to Magento 2.x isn?t just a matter and inconvenience but also comes with considerable overhead costs including:

Along with the disruption and cost, migrating your well-running store to a new platform also involves some unforeseen risks which include:

So what should you do?

Knowing that you have to migrate your store one way or the other, there is no use waiting for the last moment. Plus given that almost all stores running on Magento will now move to migrate. The sooner you act, the more chances are that any top Magento development company would be available for your project.