Here are the Services that Power the On-demand Economy 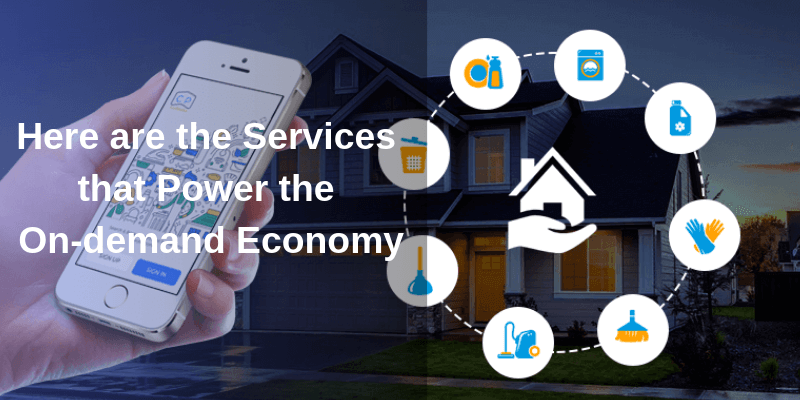 Ever since the advent of mobile apps, businesses have been trying to integrate them into the formal economy. Be it shopping, gaming, or simply reading the digital version of newspapers, everything that was initially available on the internet was pushed into the mobile domain for wider reach out. And while that strategy has had excellent results, they have in the process created a whole new segment of services commonly referred to as On-demand economy. These highly diverse set of services are combined worth hundreds of billions of dollars and perhaps more importantly, feature the fastest growth rate among other established industries.

Uber is currently the most valuable startup in the world but represents more than just a company. It’s a concept that’s literally reinvented the on-demand economy. It’s not that people didn’t call cabs before Uber but the process wasn’t nearly as fluid, ubiquitous, and cost-effective. With a decentralized model built on top of the power of mobility, the company changed the shape of transportation as we knew it. Today, virtually every major city in the world has some kind of Uber-like service with billions of trips completed every year. For cabs and motorbikes to scooters and helicopters, there is now an Uber-like service for almost every mode of transportation.

What Uber is to transportation, Airbnb is to hospitality. Currently valued higher than any hotel chain, hospitality accounts for a large chunk of the on-demand economy. Also, amidst all the on-demand services infamous for running losses, it is one of the selected few that actually turn profits.

This is currently the most heated space of the on-demand economy with dozens of food delivery apps competing to gain dominance in their respective markets. Apps like UberEats, GrubHub, Just Eat, Zomato, among others have all multi-billion dollar valuations but the market is still far from saturated. Additionally, as those startups build their logistics network, they consistently experimenting with new business avenues like hyperlocal deliveries that are yet to take off in large parts but is evaluated to have massive potential.

The term “gig economy” has gained quite a traction in recent times and if you have ever been confused about its meaning, that’s not entirely your fault. It encompasses a whole array of on-demand services with little in common except they are hired for small or fixed tasks or “gigs” as they are commonly called. Be it laundry, plumber, carpenter, web designer, architect, legal consultant, or virtually any professional service, there are countless on-demand mobile app solutions that deliver such services. Given the immense diversity involved, it is tough to accurately measure the size of this segment but by some estimates, they are worth tens of billions of dollars.

This is by far the largest segment of the on-demand economy. For instance, Netflix alone is the second largest media company in the world and if you add to it other popular platforms like Prime Video, Hulu, HBO Now, among a host of other on-demand video streaming platforms, it can be easily argued to be the growth engine for the on-demand economy. Further, with the proliferation of music streaming giants like Spotify, Apple Music, etc., the segment is branching in all aspects of media consumption.

If you are looking to acquire a piece of that massive economy through your own on-demand mobile app solution, the first thing you’d need is a clear strategy into which segment you are going to target. Secondly, you would need an expert mobile app development agency to get your plans running on the ground through intuitive mobile solutions.