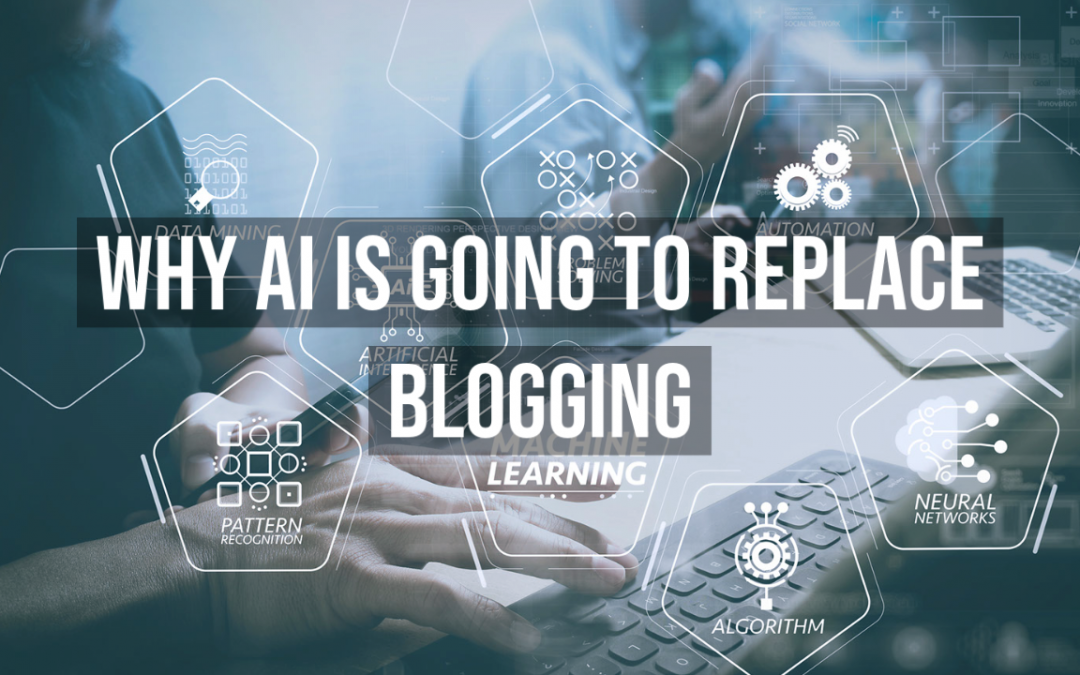 Why AI is going to replace blogging

Let me start by saying that I'm not an AI hater. In fact, I love the idea of AI and have been following its development since it was first introduced to the world in 1956. The Dartmouth Summer Research Project on Artificial Intelligence (known as Project MAC) was a seven-week intensive program that brought together a small group of students interested in computer science—including luminaries like Marvin Minsky, John McCarthy, Nathaniel Rochester and Claude Shannon—to focus their attention on creating machines that could think like humans do.

AI is taking over the world

AI has already taken over the world.

It's taken over our jobs, our homes and our lives in ways that we can't even see yet. You might not have noticed this because it's been happening slowly over time. AI has been creeping into every part of our lives since its early days as a science fiction concept and it will continue to do so until there are no more humans left on earth—or at least until humanity becomes extinct.

It would be easy to say that AI will only replace mindless tasks like filling out paperwork or designing houses but in fact much higher-level tasks like writing articles are being done by machines right now! The machine learns from examples given to it by people who know what they're doing (you), then it improves upon these examples with software algorithms until eventually the result is a beautiful piece of writing that makes any human writer jealous.

AI is cheaper than hiring a human. There are two reasons for this:

Let's say you're the CEO of a major media outlet and you've decided that AI is going to replace blogging. You want to see how well it works, so you hire a team of researchers to write an article about your company. They've been working for months, but only managed to produce one article during that time.

You're not satisfied with this result, so instead of hiring more human writers (who are typically very expensive), you decide to try AI instead. First thing's first: what kind of articles should we test? Let's say we already have some content on our site dedicated specifically toward startups—why not use those as templates? We can easily feed them into a neural network and see what happens!

Now comes the hard part: getting the neural network up-and-running and learning how best (or worst) utilize its capabilities as an automated writer.*

AI is able to write faster than any human.

This is because of its inhuman speed.

AI can produce content far more quickly than a human, and it can also read, understand, digest and respond to content at light-speed.

And AI has no need for sleep or food – it can write 24/7 365 days a year without eating or sleeping!

AI is free of human biases

AI can also be free of human biases, which are often a result of social pressure or emotional bias. While many people like to think that they're immune to the effects that other people have on them, studies show we all feel pressure from our friends and family members, even if we don't realize it. This can make us feel uncomfortable when we disagree with others in our group about something important (like politics or religion) and cause us to change what we believe so that we won't stand out as different from everyone around us.

AI doesn't experience these pressures because it's not influenced by emotions or social norms. It doesn't care if other people disagree with its decisions; it only cares about making accurate predictions—and if your blog posts don't match what the AI predicts will get more clicks, then there's no reason why an AI would keep writing those kinds of posts!

I’m scared. We all should be, because AI is going to take over the world and replace us with robots. It’s scary to think that something inhuman could think and act like you, but it’s also exciting for the same reason. I don’t want to be replaced by a robot (or any machine), but I also want my writing skills to get better.

AI will enable people who can't afford editors or writers to create content they wouldn't otherwise have been able to make themselves — potentially giving voice to marginalized communities who lack access to traditional publishing channels because of their economic status or cultural identity.

So, what does all this mean for you? Well, if you’re a blogger or a content creator, then it means that there’s no reason to be scared. AI isn’t going to replace the need for human writers and content creators. Instead of worrying about whether or not your job will be taken over by robots, focus on honing your craft and creating compelling stories. If anything, AI can help us do our jobs even better by making sure that we stay up-to-date with current events and trends so we don’t fall behind our competitors in an increasingly competitive industry!